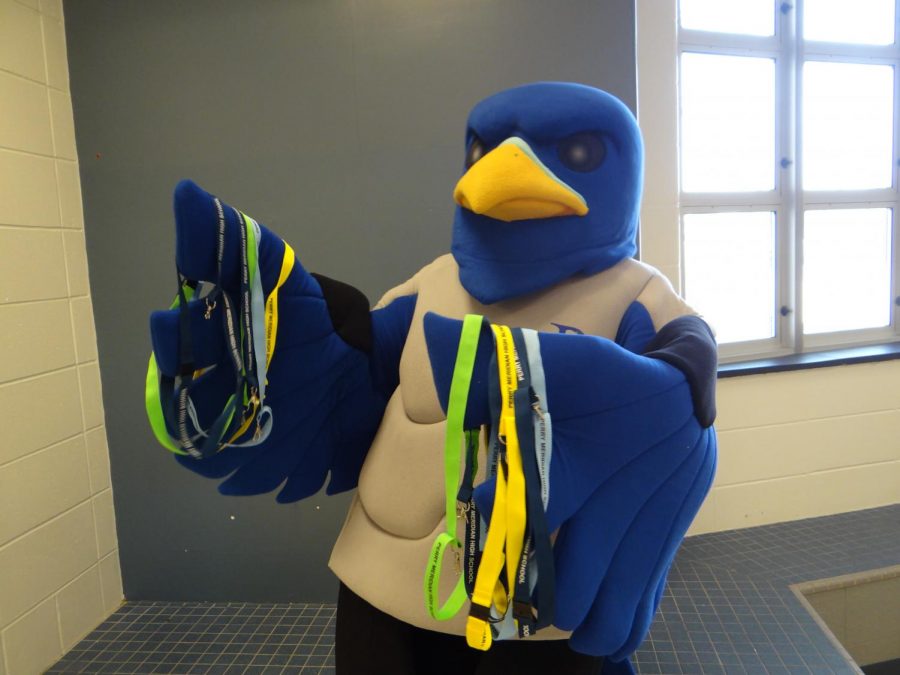 Just a few months ago, in a peaceful and relaxing world of its own, students were rightfully welcomed by summer vacation. Many dipped toes in a swimming pool; some slept until noon. Some even worked long hour shifts at a summer job.
As the summer ended quicker than it began, Twitter began emitting notices about fresh faces from staff and students alike with the idea of lanyards and the remodeled teams each graduating class.
It is seen in different forms: the kid transferring schools, the incoming freshman, the untried academic, the anxious beginner. The list goes on. It’s an experience known too well. Starting new.
Within the first couple days at Perry Meridian High School, the new lanyard policy has gone into effect school-wide. Among the newly acquired lanyards are four differing colors: navy for freshmen, yellow for sophomores, green for juniors and Carolina blue for seniors. All students and teachers have to abide by the new dress code, and the staff is tasked with the responsibility of enforcing the new requirements.
This new rule, however, comes with some unintended push back that the administration must consider.
”Lanyards are the next step for our school,” says Assistant Principal Lucas Klipsch.
Resting his hands on his keyboard , he explains the similarity between the rules of a speed limit and the rules of the lanyards. “If I am driving down a road that says 40 miles per hour, I’m going to go 40 miles per hour. It’s best for the safety of other drivers and myself; it’s the same idea for lanyards.”
Mr. Klipsch acknowledges the opposition of the lanyards too. “Sometimes in life you have to deal with things you don’t agree with. It’s not just students that wear the lanyards; it’s everyone in the building.”
For some students, buying into the promise of the lanyards is not convincing enough.
For others, it is a positive change in the school. Senior Ciara Almasri agrees with the administration. “It’s not inconvenient. I use them to hang my car keys on.”
Nevertheless, Almasri is aware of the difficulties that students have when keeping track of their lanyards. She suggests putting them in the same place every time. The thoughts of decorating them with stickers or pins allows for lanyards to be more than just protocol.“They can be individualized and be more fun,” says Almasri.
Senior Makaylah Taylor sees the effects of the lanyards and school atmosphere for better. “I feel that things move smoother this year. The students know what the administration intends to do with the year.”

Additionally, Taylor mentions the ease with which lunch lines move with the implementation of scanning systems.

“Since there are so many students in the building now, the lanyards quicken the process.”
She emphasizes that, because of all the initial change within the administration, students need time to adjust and digest the lanyards as a standard. Lanyards aren’t limited to the mere function of safety and identification. Efficency and a sense of assemblence have been present as well.

“It’s not just about safety,” says principal Kert Boedicker.
“Lanyards have made the entire student body more uniform and efficient,” mentions Mr. Boedicker. The idea of connecting the students through the use of lanyards has been pertinent to this school’s atmosphere.
“I talk to the kids at the school. It’s in my nature. Through my conversations, I’ve overheard many students say things like, ‘I didn’t know he was a senior,’ and it really shows how the lanyards have been bringing new students together.”
Not only are new students closer than ever with the lanyards, but newly hired staff members are using them to get better acquainted with one another.
Ammie Hultman, a new business teacher, is finding experience at Perry to be exciting and homey. Hultman orignally hails from Southport, but flew over to the blue side of the township at the beginning of the year.
A mother of two, Hultman makes time for her family and runs a dance studio outside of school. She has been dancing since the age of three, and is an avid reader and writer. In addition, she’s already heavily involved herself within the school, eagerly scooping out popcorn on Fridays in the lunchroom. Through the waft of buttered popcorn, Hultman explained her favorite part of Perry thus far: the diversity. “ Perry has welcomed me here already. The students and teachers come from so many backgrounds, and it’s great to see that when I come to work.”
Hultman isn’t the only new teacher that expresses enthusiam for the school year. Ryan McDonald, a special education teacher, kept himself busy throughout the summer by dedicating time at a local dog shelter, caring for three of his own rescue dogs and tending to his DJ business. Even after all of the thrill he took from the summer, McDonald looked towards starting something even more exciting: the new position at the highschool.
“I’ve been teaching for many years at Greenwood High School, so I wasn’t nervous about starting fresh here,” says McDonald. While taking a break from instructing his students, McDonald explains the only hesistance he’s come across: understanding the block schedules.
“Hopefully I’ll get adjusted to the longer periods
Meanwhile, some fresh faces are hitting the freshman class. While a new and intimidating experience, the school year has just begun, and, according to freshmen Bawi Ram Hlun, his expectations have yet to be met.
“I’m just waiting for an experience I can talk about,” says Hlun, who’s disappointed by the lack of excitement the school year has brought so far. These first weeks have not been as difficult as prophesied by Link Crew leaders and middle school teachers. Classes have been easy thus far, and navigation through the hall is straightforward, even though it may be crowded, according to Hlun.
Returning seniors, however, are shaken by the changes. The new administrative team system has received mixed reviews from students, especially seniors, who are used to the old status quo.
Seniors Alexander Mervar and Almasri have had to switch to a new guidance counselor, and, while they both like Stephanie Morrow and appreciate the hard work she’s been putting in for the senior class, the transition has not been easy for every student.
There has also been confusion among students, with Almasri saying she “doesn’t really get it,” in reference to the teams. She also isn’t sure whom to go to about her concerns.
On the other hand, the new system has brought about a new, positive wave of interaction with students, according to seniors. The new senior class administrator, Zachary Ervin, has been especially friendly.
“Even if he doesn’t know your name, doesn’t matter, he’ll just talk to you,” says Almasri. She sees this increased interaction and closer communication with the students as a positive shift.
In the midst of these changes, one loss has hit the senior class, as the senior incentive room has now been transformed into the College and Careers Room, which is being used by Ms. Rebecca Shull to help seniors plan their futures. Shull says that it wasn’t her choice to use the former Senior Incentive room. However, Almasri is unhappy with the change, saying, “I want to play ping-pong.”
Mervar is less upset by the change. “Not a big deal,” he says, “because I go to Wendy’s anyway.” However, seniors see how it could upset those who don’t have access to transportation to and from the school during the school day. The general consensus from the senior class, though, is that the senior incentive room should be revived.
“It’s nostalgic to look at the freshmen,” says Almasri. The new wave of freshmen remind her of her own freshman year and how “crazy” it is that the class of 2022 will be in the seniors’ shoes in a few short years. She’s excited to see these freshmen grow. Mervar says the freshmen as the largest class to hit Perry, saying that,“You can definitely feel the congestion in the school.”
Despite its immense size, the freshman class has been fairly tame, according to Mervar, who’s fascinated by the newcomers. He remains hopeful that class relations will be calm throughout the year.
These changes signal a new era in Perry history, one in which, Mr. Boedicker says, “We Fly Together.”