Through the eyes of a fan: Football pride comes alive 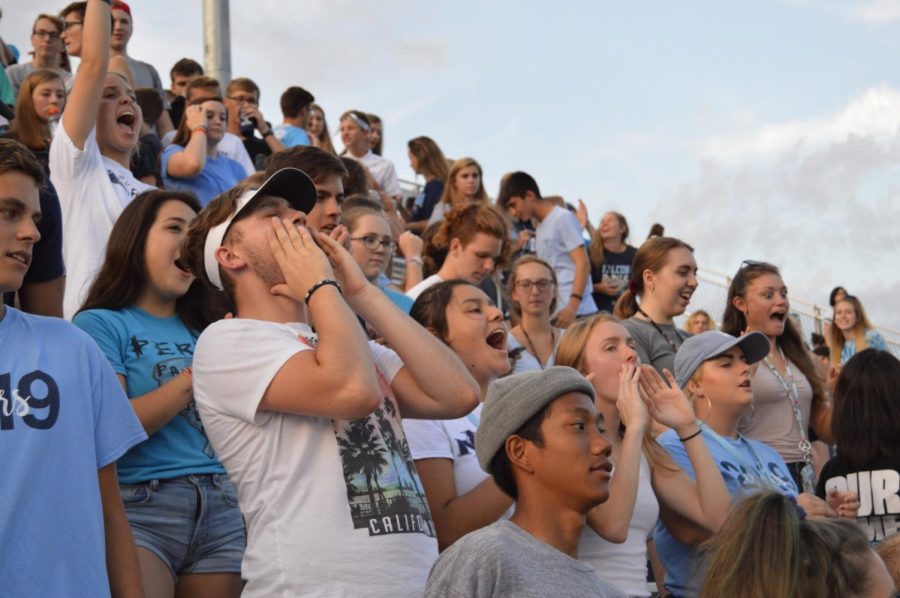 The smell of popcorn and hot dogs fill the air as the buzz of the crowd echoes throughout Falcon Stadium. The cheerleaders stand in formation on the track, starting the chants early.
Last year’s unveiling of a brand new Falcon Stadium allowed students to have a home to see their football team play.
Now, Perry starts its second year of the stadium facing off in a scrimmage, or a non-official practice game, against Franklin Central High School.
Seats on both ends of the track filled fast as students and staff purchased various snacks from the two concession stands and settled in.
Senior Keaton Hoffman is an avid supporter of the football team. He attended the opening game of last season and fell in love with it from there.
“Winning is always nice,” Hoffman says, “but the student section brings good energy no matter what.”
As if on command, the crowd breaks out one of its rally chants. Students of all grade levels, often times led by the cheerleaders, belt out the words of chants, such as the “Falcon Rumble” and “I Believe That We Will Win.” Fists pounding and feet bouncing off the ground, the student body comes together in a euphony of roaring voices.
Games aren’t all sitting in the stands some students find entertainment in other ways, even just walking around with their pals.
“I like hanging out with my friends and just connecting while having fun,” says freshman Zoe Roberts.
“Even if we don’t win, the experience and memories are what we are there for.”
An orange and bluish hue begins to shine from the setting sun against a dark green football field, complete with Perry’s Carolina blue on either side. Many spectators rush to capture the moment on their phones with pictures of the sky.
The dress-up themes are one of Hoffman’s favorite aspects of the games. These themes include dressing in a certain color or style in an effort to have the student body come together to show support for the team.
“My personal favorite is the Hawaiian themed games,” says Hoffman.
Over the course of last season, the student body had plenty of crazy moments.
“My favorite memory is crowd surfing last year,” says Hoffman, recalling an instance of a fan being pushed over the heads of the crowd one person to another.
“He started from the bottom and ended up all the way at the top.”
Even through the final minutes of the game, the cheer section continues to chant and get loud, never sitting down.
As the game wraps up and the stadium lights shine bright, fans begin to disperse, making sure to get plenty of pictures with their friends before the night is over.
While the football players walk off the field, one last Perry Fight Song breaks out, ending the night as it began, thunderous.
“PMHS! The Best!”