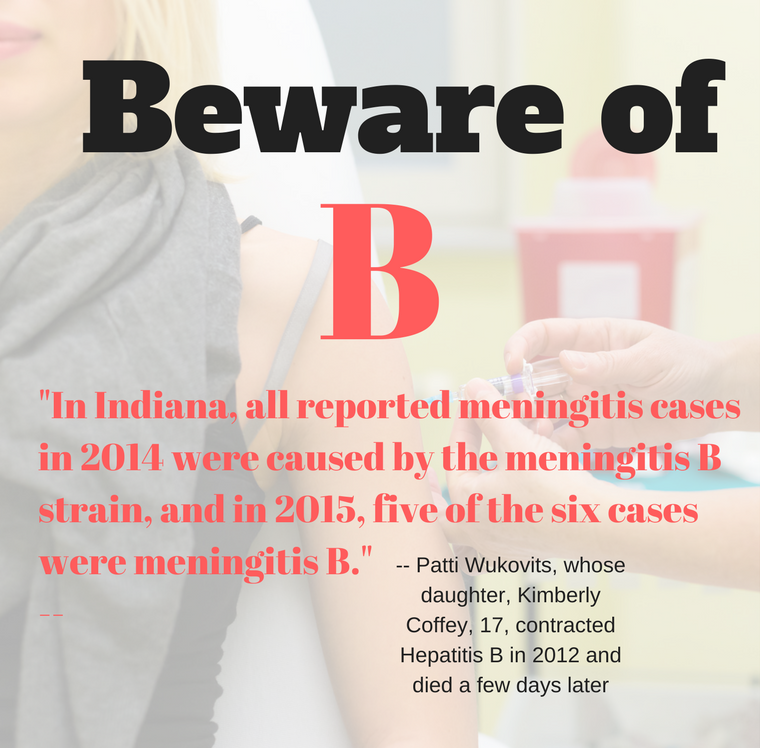 Not only is bacterial meningitis deadly, but those who survive from it may suffer lifelong health problems, which is why officials are requiring Indiana high school seniors to receive the meningitis vaccination at the beginning of their senior year.

All seniors who do not have the vaccine by Aug. 21 will be excluded from school until they provide proof that they have received it.

Families who have lost loved ones to Meningitis B are working to increase awareness of its dangers. Patti Wukovits, a registered nurse, is one of them. Her daughter, Kim, died of the disease in 2012 right before she was to graduate from high school. No vaccine was available then because the Hepatitis B vaccine was just approved in 2015.

“Kim went from being a healthy teenager to being on life support in a matter of hours,” Wucovits wrote in a guest column. Vaccinations are available at these area clinics below and at many doctors’ offices.”

— The Marion County Public Health Department provides vaccines at two area clinics on weekdays only. Cost is free to $20, depending on insurance. The South District is at 505 National Ave. Monday walk-in appointments are 8 a.m. to 4 p.m.; Tuesdays are by appointment only, 3 to 6 p.m.; Wednesdays are by appointment only, noon to 4 p.m. Walk-ins are available Thursday 8 a.m. to noon; and appointments are available on Friday, 8 a.m. to 4 p.m. Telephone: 317-221-5700.  The other southside location is Stop 11 Clinic at 2532 E. Stop 11 Rd. It offers no walk-in services. On the first and third Tuesdays, it is open 8 a.m. to noon; and on the second, fourth and fifth Tuesdays, it is open noon to 4 p.m. On Thursdays, appointments are 8 a.m. to noon. The Stop 11 Clinic is closed other days. Telephone: 317-883-3165.

“Kim went from being a healthy teenager to being on life support in a matter of hours,” Wucovits wrote in a guest column published in “The Journal Gazette,” in Fort Wayne and in other Indiana newspapers. “After several days in the ICU, Kim lost her battle with the disease. We buried her in the prom dress she never got to wear.”

Most parents don’t know that their children need two different vaccines to prevent different strains of meningitis, Wukovits wrote, adding that nearly all of Indiana deaths from meningitis in recent years have been from Meningitis B.

Senior Brandon Axsom had his own experience with tragedy in the face of meningitis. His mother died from it when he was 2 years old in 2002 when no vaccines were available.

“I think I got it (the meningitis shot) last time I went to the doctor because it was time,” he said. “I remember it being important.”

Meningitis most commonly comes in the form of a viral infection, but it can also exist as a deadly bacteria or fungus. Meningitis is an inflammation of the lining around the brain and spinal cord, and if not treated, may cause brain damage or hearing loss. It’s spread through close contact, coughing and sneezing.

One third of the people who get infected with meningitis are teens and young adults. Even with antibiotic treatment, ten to 15 percent of those infected still die. In Indiana, all reported meningitis cases in 2014 were caused by the meningitis B strain, and in 2015, five of the six cases were meningitis B.

Senior Purseh Gbadyu has received her meningitis vaccine. Gbadyu said vaccines are important. “They benefit us in the long run and prevent us from getting really sick.”

Jennifer Maki, a nurse practitioner at the Little Clinic on Southport Road, said vaccines are important, and school districts should require them.

“I think that they should because if they don’t enforce it, people will potentially not do it because they don’t have to…Everyone has the right to refuse, but they’re taking their own risks. I feel that it is very important to vaccinate your child.”